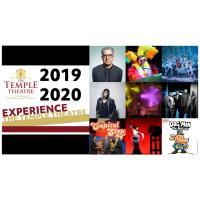 Saginaw, MI – June 6, 2019 - The Temple Theatre will host a diverse set of shows during the fall of 2019 and spring of 2020. In addition to the shows listed, additional performances will be announced in the coming weeks and months ahead.

”The Temple Theatre creates an experience like no other venue in our region and we look forward to sharing our gem with as many people as we possibly can,” says Michael Kolleth, Executive Director of the Temple Theatre Foundation. “As we continue to work to bring impactful programming to the Temple Theatre, we want to engage the community with performances that entertain and evoke emotion,”

In addition to the show line up, the Temple Theatre will also be continuing the Saginaw Silver Screen films this year. "Seeing a movie beneath the cavernous golden ceiling of the Temple is unlike anything a standard movie house or steaming service can offer” Kolleth said,” We aim to provide not only the best possible movie-going experience for guests, but also aim to make it an affordable family outing.” Tickets for the films are only $5 and a pop and popcorn combo is $3.

Deepak Chopra: The Nature of Reality
September 19, 2019 / 7:30 p.m.
"There are countless ways we make our intentions come true, and people are constantly looking for the right one. The promise of making our dreams come true remains baffling, however. Some people manifest their deepest dreams, wishes, and desires while countless others do not.

When you change how you view reality, reality changes.
Life is a lucid dream, and everything that happens is a dream come true.
When you know who you really are, you will manifest your dreams at the highest level.
Join New York Times bestselling author Deepak Chopra as he addresses these questions as well as practical ways to experience transformation and healing."

Moscow Ballet makes Christmas gift giving easy with the holiday performance that delights all ages…from the life-sized Kissy Doll to the fierce, red-eyed Rat King; and the Russian Troika Sleigh bringing Masha through the Snow Forest to the Land of Peace and Harmony which is populated with 10 foot tall dancing puppets, exotic flying birds and dancing couples from the world’s five great heritages.

The Great Russian Nutcracker features award-winning Principal Ballerinas and Danseurs from the top ballet academies in Russia and a large corps de ballet.

In addition to the Great Russian Nutcracker and other classic ballet performances, Moscow Ballet advocates for community engagement in the arts and sends advance dancers to tour cities. These dancers audition local ballet students for children’s roles in the performances, see Dance-with-Us for more information on this program."

Reza: Edge of Illusion
December 17, 2019 / 7:30 p.m.
More than a magic show, Reza infuses stage of the art production elements, masterful
comedic timing, and numerous interactive; inspirational moments, allowing the
audience to experience the magic first hand. Perhaps Reza’s greatest secret is his
uncanny ability to communicate his performance art on such a personal level.
Young and fresh, Reza’s new show, “Edge of Illusion,” has earned various awards
including “Magician of the Year.” Reza is intriguing, engaging, and captivating. He isn't
just a magician. He is a world-class entertainer.


The Machine Performs Pink Floyd
January 18, 2020 / 8:00 p.m.
"The Machine performs Pink Floyd, America's top Pink Floyd show, has forged a 30-year reputation for extending the legacy of Pink Floyd, selling out theaters, premier showcase rooms and casinos across North America, Europe and Asia, performing at renowned music festivals such as Bonnaroo, Riverbend, and Gathering of the Vibes, and sharing the stage with full symphony orchestras, including the Atlanta, Detroit, Pittsburgh, Jacksonville and San Diego Symphonies, as well as the Buffalo Philharmonic.


When Pink Floyd released The Wall in 1979 it brought the legendary band into a different realm. The Machine presents a special 40th Anniversary performance of The Wall in its entirety as only The Machine can, plus an encore featuring fan favorites from other Floyd albums. Featuring the Interstellar Lights."

ALL-4-ONE
February 15, 2020 / 8:00 p.m.
If you’ve ever been in love, then you’ve heard the name All-4-One and their timeless songs “I Swear”, “I Can Love You Like That”, “So Much In Love”, “ I Turn To You”,“These Arms”, “Beautiful As You” and much more. The Grammy Award Winning Group All-4-One is internationally known for making beautiful love songs that not only chart radio airwaves, but also garner countless awards. Celebrating their 25th Anniversary this year,All-4-One continues to tour the world as the original members and a collection of hit songs under their belt.

The Capitol Steps
March 6, 2020 / 7:00 p.m.
Sixteen Scandals Fiscal Shades of Gray
Obama Mia! Make America Grin Again
I'm So Indicted When Bush Comes to Shove
In 1981, a group of Senate staffers wanted to stage a Nativity play for a Christmas party. But after scouring all of Congress, they couldn't find three wise men or a virgin. Bah-DUM-bum!

Instead, the Capitol Steps were born, a hilarious comedy troupe that lampoons the political figures of the day through song parodies and skits. Nearly four decades later, they're still making a mockery of our democracy to the amusement of snowflakes and deplorables everywhere!

Always well received, they're as popular in Washington as they are around the country. They've even performed for the last five presidents – six if you count Hillary. Hey-oh!

Sure, you can enjoy their rapid-fire satire twice a year on NPR's Politics Takes a Holiday or on any one of their 35+ albums. Or, you can catch their crazy antics LIVE at The Temple Theatre. It's going to be yuuuge!

Dog Man: The Musical
March 13, 2020 / 6:30 p.m.
"Recommended for ages 6-11
A hilarious new musical based on The New York Times #1 bestselling series from Dav Pilkey featuring the crime-biting canine who is part dog, part man and ALL HERO! He’s ready to take on Petey the Cat, the felonious feline who’s always hacking up harebrained schemes. Songs for the show by Kevin Del Aguila, a New York Outer Critics Circle Award nominee for Altar Boyz, and Brad Alexander, an Emmy© winner for Peg + Cat. "

ABOUT THE TEMPLE THEATRE AT THE SHAHEEN PERFORMING ARTS CENTER
Known as the "Showplace of Northeastern Michigan", The Temple Theatre is one of Saginaw, Michigan's most distinguished buildings. With seating for 1,750, the theatre has been graced by legends ranging from B.B. King to George Carlin. It is home to the world's only Barton Butterfield Special organ in original condition. Today, it welcomes thousands of patrons per year to performances of dance, theater, comedy, and popular and world music. In addition, the Saginaw Bay Symphony Orchestra and the Saginaw Choral Society each call the Temple home, staging their performances in the main hall and operating out of the adjacent Shaheen Performing Arts Center. The Temple Theatre and Shaheen Performing Arts Center play host to a variety of rental events throughout the year as well, including wedding receptions, business meetings, galas, dance recitals, graduation ceremonies, movie and music festivals, and more.
Contact:
Thor Rasmussen , Marketing & Creativity Manager
Business Directory News Releases Events Calendar Hot Deals Member To Member Deals Marketspace Job Postings Contact Us Information & Brochures Weather Join The Chamber